Objects to Observe in the June 2021 Night Sky

Best events for the month for June: Annular Solar Eclipse for those who can travel or lucky to live in the right location but for everyone else it’ll be the Planetary line up of Venus, Moon and Mars around mid-month.

Mercury – The innermost planet is too close to the Sun to observe in June 2021.

Mars moves West from Gemini while Venus moves East from Taurus and they both eventually meet up in Cancer.

Jupiter and Saturn – The gas giants continue along their separate ways with Saturn in Capricornus and Jupiter in Aquarius both now high enough out of the morning murk to become telescopic targets.

Neptune and Uranus remain too low on the horizon for any observations apart from Lunar pairings. 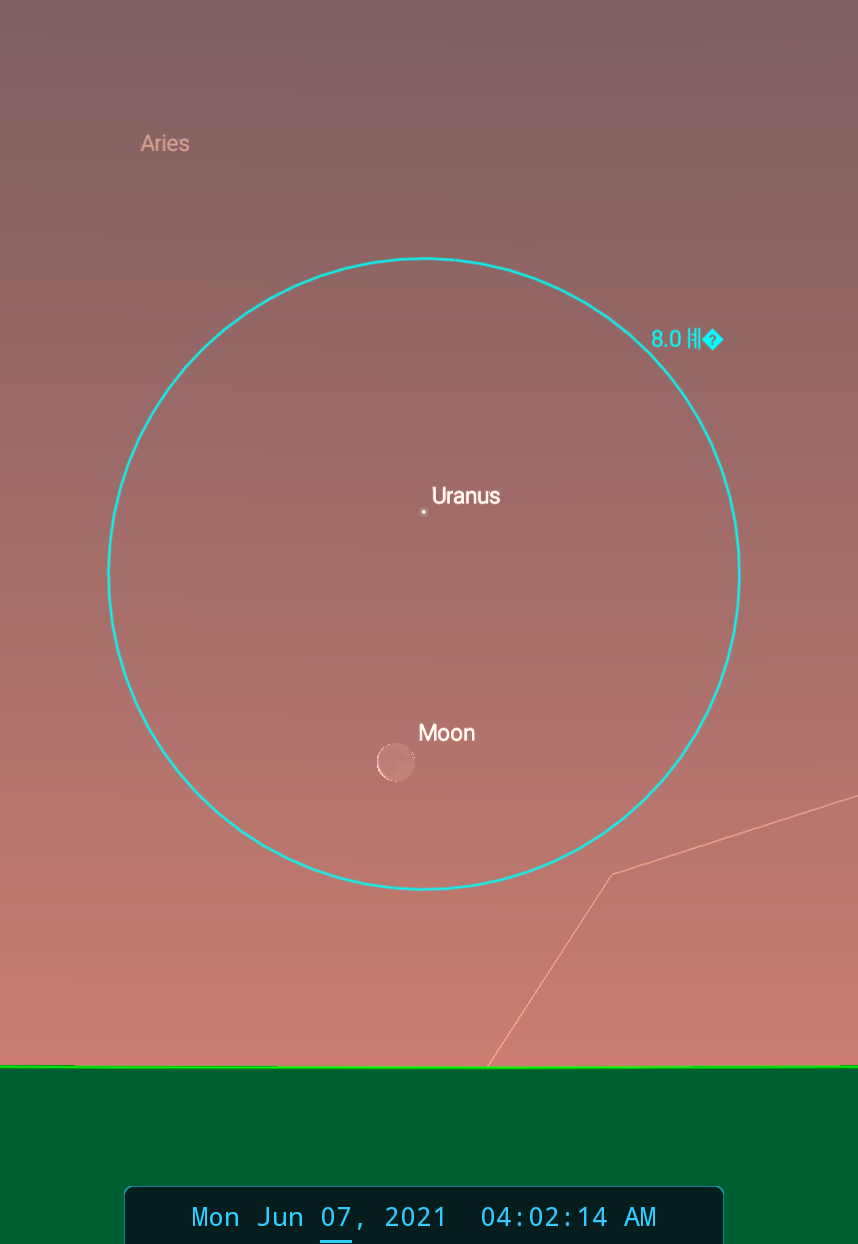 June 10th – Annular Solar Eclipse. Warning Note: Annual Eclipses are not total eclipses so the Sun is never entirely blocked by the Sun and therefore can never be viewed without a telescope during an Annular Eclipse. Properly filtered telescopic and naked eye observations using solar glasses will provide dramatic views of a giant ring of sular disc. 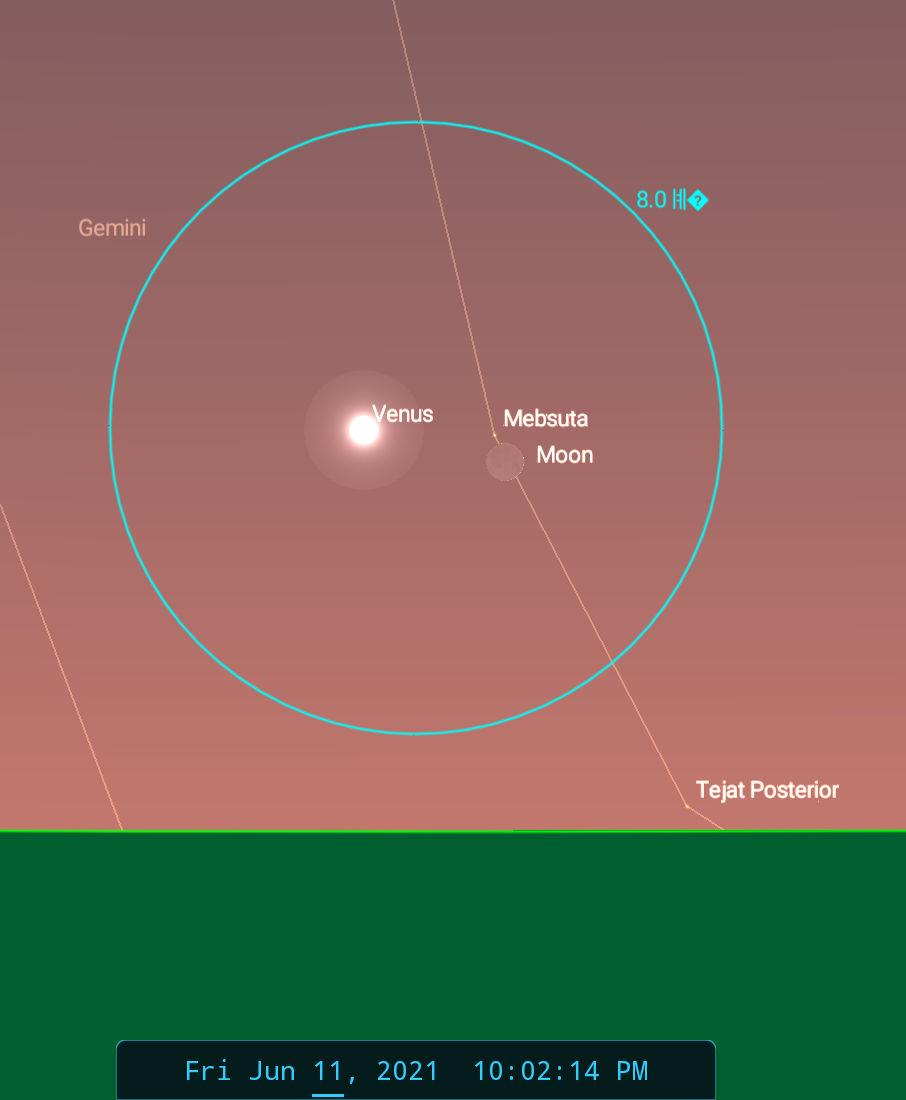 Visible from Russia, Greenland Europe and Northeastern North America. So this is not visible from Saskatchewan but the path is within a long days drive. It would be a 1300km drive for a chance to briefly see this annular eclipse at Sunrise. 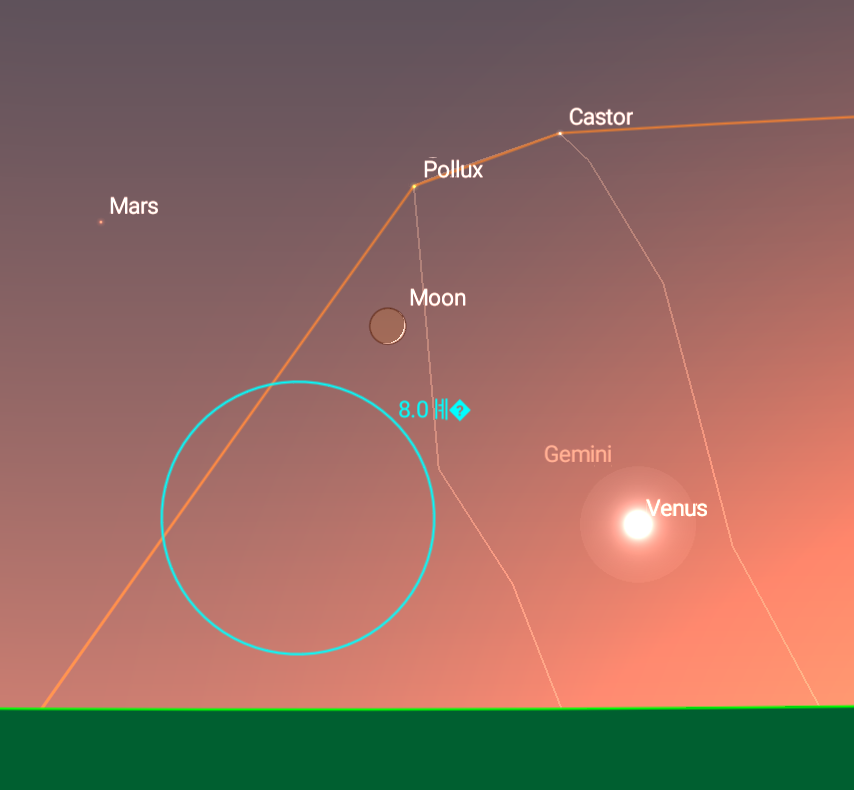 June 13th – Mars and the Moon as close as 3-degrees apart. Already past best by the time we see it in Saskatchewan.

June 27th – Saturn and the Moon as close as 4-degrees apart but a bit further here in Saskatchewan.

June 29th – Jupiter and the Moon as close as 4-degrees apart but farther here in Saskatchewan.

June 30th – Just after sunset, Venus and Mars will be 7.5 degrees apart in the middle of Cancer.

Entire month – Using proper filtering, activity on the Sun is starting to intensify as solar cycle 25 begins. This means sunspot formation and evolution should be monitored.