Welcome to Episode 97 of the Actual Astronomy Podcast, Objects to Observe in the March 2021 night Sky.

We use a finder circle of 8-degrees like a wide-field binocular and  a 5-degrees for scale, observers should note your fist at arm’s length is 10-degrees and common finders and binoculars have fields typically in the 5-degree to 8-degree range..so that’s why we did this 🙂

Best event for March: Jupiter and Mercury Conjunction and there will be a Supermoon but generally we don’t count these as visual events.

Mercury – Still resides in Capricornus appearing at it’s best, and brightest at 0.0 magnitude in the morning sky for Southern Hemisphere observers for 2021.

Venus – Venus is in conjunction with the Sun, that means you cannot see it until it emerges from the bright glare.

Mars – Mars is now in Taurus but ends the month at 5.3 arc minutes making it a challenging target for telescope users to discern surface details.

Jupiter and Saturn – The bright planets move farther into darker morning skies in the constellation Capricornus and remain too low in the atmosphere for telescopic observations.

Uranus – Remains in the evening sky but is not long for the hunt as it’s host constellation, Aries, enters the glow of sunset by month’s end.

Neptune – Is in conjunction with the Sun and lost in its glare.

March 1st – Under dark skies the Zodiacal Light becomes visible for the next 2 weeks after sunset. Watch where the moon sets on the 13th and 14th and follow the light extending from the horizon towards Mars. By the 15th the Moon is too bright and sets too late.

March 3rd – Mars is 3 degrees south of the Pleiades

March 4th – Vesta is at opposition

March 3rd to 6th – Mercury and Jupiter as close as 0.3-degrees just before sunrise on March 5th, however the says on either side. On March 6th Mercury is at greatest elongation West placing as high in the morning sky as it will get for 2021 and the best morning appearance for the Southern Hemisphere. These observations will be challenging due to sky brightness and proximity to the rising Sun. Note: be sure to check your local sunrise time to avoid looking at the Sun as even a glance at the sun through binoculars can result in permanent eye damage.

March 9th to 11th – Moon passes south, below, Saturn, Jupiter and Mercury but this event does not appear to be easily visible from the Northern Hemisphere. Note: be sure to check your local sunrise time to avoid looking at the Sun as even a glance at the sun through binoculars can result in permanent eye damage.

March 10 – Mars is small at approximately 6 arc seconds, but it’s current tilt will allow both polar caps to be seen from Earth.

March 17th – Moon and Uranus, but the Moon will be 7-degrees south of the planet Uranus as viewed from the Northern Hemisphere though other parts of our planet may be able to view them as close as 3-degrees. 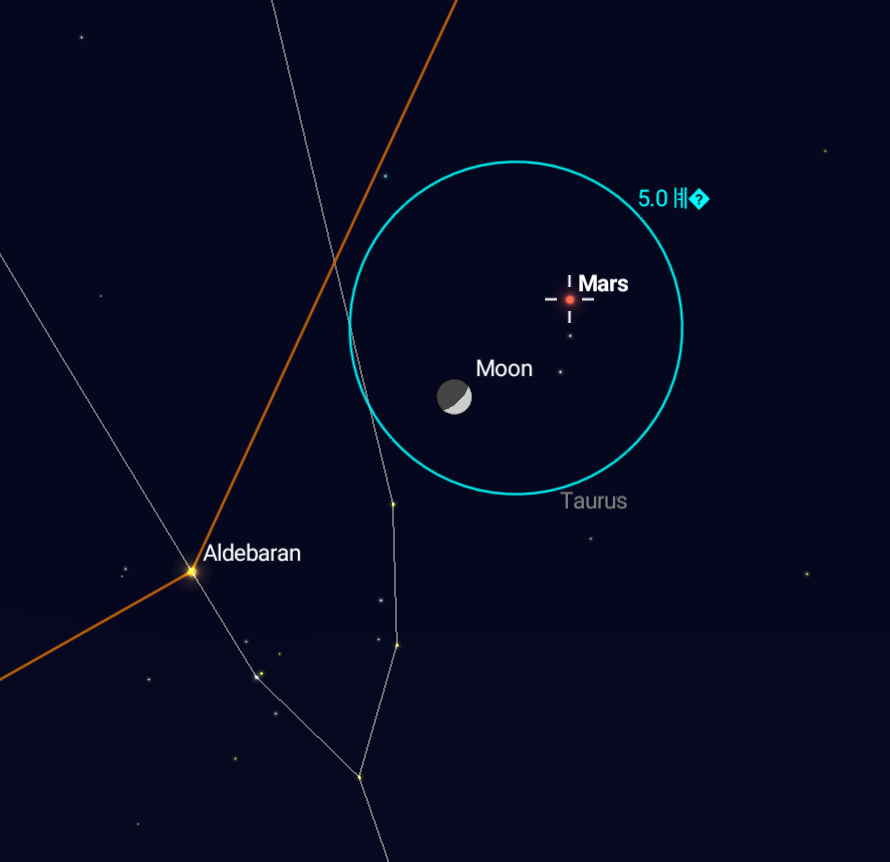 March 19th – Moon and Mars pair up, with the Moon getting as close as 1.9-degrees south of Mars. The Moon also makes a great pointer towards Aldebaran, the eye of the bull of Taurus and the bright marker for the Hyades open star cluster.

March 23rd- Mars 7- degrees north of the bright star Aldebaran. For those with wide field binoculars such as 7x or 8x glasses with 8 degree fields will show both in the same field.

March 28th – Full Moon – a “Supermoon” according to Fred Espenak. While visually observing this event is unlikely, this full moon is the Spring Perigee Moon, meaning the Moon is full while at its closest point in its orbit around Earth.

March 31st – Zodiacal Light visible for the next two weeks.